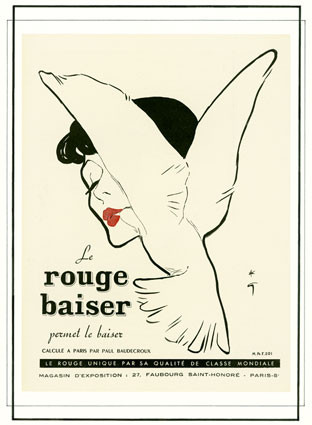 Today, I had only one goal: clear out the office.

Over the past few weeks of preparations for the dance performance that just passed, the upcoming Christmas event and next year’s big show in February, our office had gradually become a store room – two mannequin busts, a circular clothing rack, bags and bags of cloth samples and two prototypes of costumes/props – I could barely walk a straight line from one end to the other. And since everyone was out for the day, I had the space to myself.

Just for kicks, I decided to dress for the occasion: I wore bright red lipstick. Not your run-of-the-mill dark red or deep red though. It was a shocking pink/red that was such fun to put on, as if donning on a persona.

What I didn’t expect though, was the reaction people gave me when my lips were brighter than, well, everything else around me. Passers-by would unabashedly stare, colleagues from other departments would look quizzically at me or worse, react as one would when you talk to a friend with a booger on her face. Except I had no booger! I just had red lipstick on.

‘I’m distracted by your lips!’ a friend exclaimed, midway through our chat.

‘Why so dolled up today?’ a dancer asked.

‘You look old.’ the little ones laughed.

Oh well. It was fun and because of that, I’ve decided to make it my red lipstick week. I wonder what other reactions I’ll get? That said, I accomplished two marvelous things today: the office is much cleaner now, and I tried something new.

Doing my best to frame the intangible world I see, taste, hear and breathe... to make sense of everything and to make each fleeting moment count.