‘Grandma has been hospitalized.’ The Mother said, walking into the bedroom as I did my hair early this morning. ‘She was excited about us returning to Japan and began cleaning up although she’s physically not up to it. When she didn’t turn up for lunch at the dining hall, the nurse went to her room and found her lying on the floor, at the foot of the bed. She had collapsed the night before and couldn’t get up.’

News usually takes time to reach my face. I’ve been raised not to show any emotion immediately nor react to situations. I prefer to let the words wash over me while I grapple with its reality in my own space and time. With one hand still holding my hair up, I turned around to Mother and asked, ‘How’s she now?’

‘She’s on a drip. The doctor says that she’s dehydrated, weak and that her metabolism is low. This means that she found it hard to eat and that’s why her body didn’t get enough nutrition. He was really glad that she didn’t get pneumonia, seeing how it’s winter and she was just wearing her nightgown.’

When the Mother first told me that she felt we all needed to visit her soon, I brushed it off with a flippant ‘we’ll do it next year’ because work has been crazy-busy and quite honestly, traveling back to Japan with everyone is expensive business. A week later though, we got an email from Aunt Keiko saying that she’d visited Grandma and noted that she looked so much weaker. Then when Grandma wrote to Mother, she revealed that she actually had a fall a few weeks ago.

Initially, she said she was fine but in the later email, she revealed that she had fallen on her mattresses and couldn’t get up. So she lay there the whole night and only managed to get up in time for lunch at the dining hall. Her secret was safe from the caretakers.

With that news though, we immediately made plans to return to Japan. Grandma tends to hide too much. Especially when she doesn’t want people to know that she’s not as independent as she seems.

With this morning’s news though, the whole family (including my sister and her husband) will now travel back together.

‘Is there a chance that we’ll need to return to Japan earlier?’ I was mentally preparing a list of responsibilities to delegate and appointments to reschedule.

‘Well, we will only find out later tonight or tomorrow when Aunt Keiko writes again. I’ll let you know once I get some news.’ Mother replied quietly. ‘The question I don’t want to ask but am wondering all the same is… will I need to pack a black dress?’

‘Grandma won’t want us dressed in black at her funeral will she?’ It was a matter of fact. She likes colours.

As I traveled to work though, the tears began to well up in my eyes and the tears made their way down uncontrollably. I tried to fight them at first but gave up when I began choking a little.

Grandma is special. I have been so proud of her since I was young. She and her sisters were a rare breed of women then who didn’t want to get married quickly but instead, worked hard to graduate from the top universities in Tokyo. She harboured dreams of marrying well. When she met my Grandfather (a Brigadier-General), she suddenly found herself out in the farmlands, rearing cattle and feeding chickens. Home was a curtain strewn across two wooden stable walls.

Day in and out, she carried pails of water for the animals and made her dresses by hand. Her dresses though, were never black. She chose the cheeriest colours and patterns. Even while she was at the neglected edge of the world, she never lost her sense of royalty and perhaps, that was the steel needed to get through the wars and raise up two children, bear the brunt of a drunk’s brutality and deal with houses that didn’t feel like homes.

I have several images of her burned deep in my mind.

In the deep darkness of night, she leaves the house dressed in her nightgown, running barefooted to the nearest neighbour to seek refuge, while the pet dog scurries by her side, enjoying the surprise night-run. She was running for her life because her drunk husband had grown violent towards her.

In a classroom of youths, she’s the oldest student. The only one perhaps, with 60 years of wrinkles lining her face. She walks with her backpack to and from the British Council. She was studying higher English for her sense of fulfillment and accomplishment.

In the solitude of home, she’s seated at her piano learning to play the piano. Her bony aged fingers playing a kid’s tune. She’s taking lessons from a much younger piano teacher because she wants to learn to play the worship songs that have given her hope.

In a long queue of people, she’s the oldest member of church who arrived almost 2 hours before service to get a good seat. Then she stays for the second service because she knows she didn’t quite understand it all the first round. She was feeding herself with the one thing she knew was truth – God’s word.

At a table set with dainty bowls and plates, filled with cheap Japanese food, she eats with the class of an English Lady. This was life.

She is tenacious, stubborn, loving and about 4 years ago, she left us to return to Japan as she wanted to spend her final years in her homeland, with her people.

Do I think about her everyday? Not in the past few years. But today, she filled my mind and I was a sensitive and emotional person because of that. I felt so much and wasn’t quite sure what I was feeling.

All I knew was that I am not done yet living life with her. I want to spend time talking, gleaning our history from her experiences, taking pictures of her, remembering her. I want to frame her beautifully because she is an amazing woman. Imperfect but so gloriously gorgeous.

I am her grand-daughter and her blood runs in my veins. There is a part of her in me. And I feel that as I understand her… I will understand myself that little bit more.

I will NOT pack a black dress.
I will not be needing it at all.

For a great friend who may be deployed early next year to Afghanistan.

And for the rest of you… who face the fight of life. We’ll make it, side by side, for what we believe in.

Posted on December 2, 2009 Posted in music, randomLeave a comment

Wednesdays are usually raucous, ear-blastingly loud and chockful of random laughter, jokes, rants and tantrums. Throw in couple of singers practising, the musicians playing their instruments while doing their personal rehearsals and you have… tired ears.

But still, I couldn’t resist listening to Jeff Buckley tonight. What can I say? His album ‘Grace (Legacy Edition)’ is brilliant and I’m enjoying it a whole lot. I wish I had the chance to watch him perform ‘live’ but since he’s passed on… youtube it is. Interesting note: Years ago during a creative lull when Radiohead hit a dry spell in their songwriting and performances, their manager took them out to watch Buckley perform. So inspiring was his performances that they returned thereafter to write and produce the amazing album, The Bends. Listen to Buckley’s ‘So Real’ and Radiohead’s ‘Creep’ & ‘Street Spirit’, you’ll understand why. Even Thom Yorke’s singing sounds like Buckley’s. I like.

Which reminds me… I have so many concerts and gigs to attend in January and February (8, at last count). I hope that my work will allow me to enjoy those nights thoroughly. Look out for my reviews then!

But back to the main event today: The release of the December issue – the one where we girls all had to get dressed up and photographed. I don’t hate it but I don’t love it.

‘Let’s put it this way,’ the husband replied, when I asked him what he thought of the photo-spread. ‘It’s not a badly taken picture of you, but it’s not the best I’ve seen of you. The personality conveyed in that picture is not you, and that’s the problem. I think the pictures that capture you in your relaxed moment are the best.’

How true. I think that even my profile picture on the other blogs I own are way more flattering because they’re me. In the magazine, I’m some glammed-up cat. They said that they had the most problem finding a good picture of me because I looked waaaay too sexy. Odd because darn it, I wasn’t channeling sexy. I was merely obeying the photographer when he asked me to do something.

This made me realize that due to my general disinterest in taking pictures (I have no idea where it stems from) I have failed to document landmark moments in my life – whether quirky, beautiful, special or random – I don’t have any pictures of myself that I’m specially proud of in 2009. And so much happened this year!

Now all I have is that prettified picture of a non-me. I have chucked the magazine aside. I don’t want to look at it because the more I see, the more faults I find. I think I’ll just have to find a new way to capture the gorgeous. Because that’s the root of it all – we are all gorgeous creatures who may not always look that way in pictures – now how can we frame who we are, for all posterity? 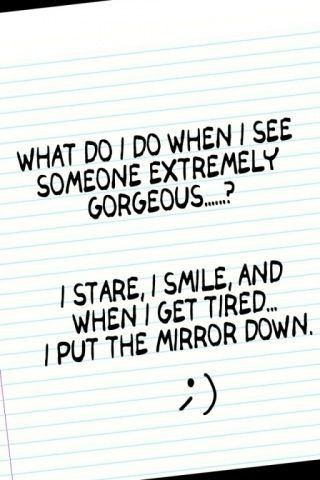 Now let’s hope I can feel this way when I get up tomorrow morning, sleep and caffeine deprived because for now, the mirror is all I have. =)

At the end of my life, I want to know that I have thoroughly enjoyed my journey on earth. I want to have loved, to have sacrificed out of desire and understanding, to have tasted emotions and in them, tasted the richness of Christ’s goodness in my life. I want to know that I’d impacted lives, not necessarily on a large stadium scale but individual lives that somehow, after meeting me, could find the inspiration and passion to carry on, to make a change.

At the end of my life, I want to be surrounded by love. I want to still get excited watching an ant push a crumb across the massive planes of my table, to smile when I see a flower bloom in the rain, to laugh when I hear a belly chuckle. I want to be able to enjoy snuggling under the comforters when it’s cold, to cuddle a warm body and squeal when the warm body’s toes are freezing cold.

Most of all, I want to laugh till I cry.
I want to be found smiling when I am gone.

There are so many years left that I know, the journey in truth, has only just begun. I can only thank God that at this junction, I know what love and desire is. I can enjoy the simple pleasures and be mesmerized by the complex. I get an adrenaline rush with chaos and gain sweet satisfaction from a mere piece of paperwork.

And on my tombstone?

‘She lived, laughed and loved passionately. With amazing style.’

I wonder what I’d wear in heaven?

Doing my best to frame the intangible world I see, taste, hear and breathe... to make sense of everything and to make each fleeting moment count.